Lake City area’s near-annual rain deluge resulted in two almost simultaneous road emergencies as torrents of mud, rock and water stranded recreationists on the Shelf Road near Burrows Park and, in a separate instance, stranded motorists and closed State Highway 149 north of Lake City throughout the night on Friday, July 23.

One Lake City resident, stranded in her car overnight near Blue Mesa Reservoir, termed the torrential rain and resulting road damage as being of “Biblical proportions.”

An unprecedented amount of water resulted from evening and night downpours on Thursday, July 22, and succeeding afternoon and evening microbursts on Friday, July 23, through Sunday, July 25.
According to local weather statistician Phillip Virden, precipitation thus far in July totals 4.95” through Sunday, July 25, rivaling the all-time record 5.51” which was set in 1981.

The day-by-day summary for water accumulation at the Lake City weather station gauge was .33” last Wednesday, July 21, .07” Thursday, July 22, and an additional 1.23” of rainfall which was recorded on Friday, July 23. Over the weekend, respectively .37” and .99” rainfall was received locally on Saturday and Sunday, July 24 and 25.

Last week’s unusual rain occurrence began late Thursday afternoon to the north of Lake City, at Powderhorn on Cebolla Creek, when 1-1/10” of water accumulated in less than an hour’s time, resulting in torrents of mud and rock which briefly delayed traffic on Highway 149. Adjacent dirt-surface roads and ranches in Powderhorn were also impacted, including the residence of Chris and Lana Athey, and family, where mud and rocks up to 3’-depth impacted ranch buildings. 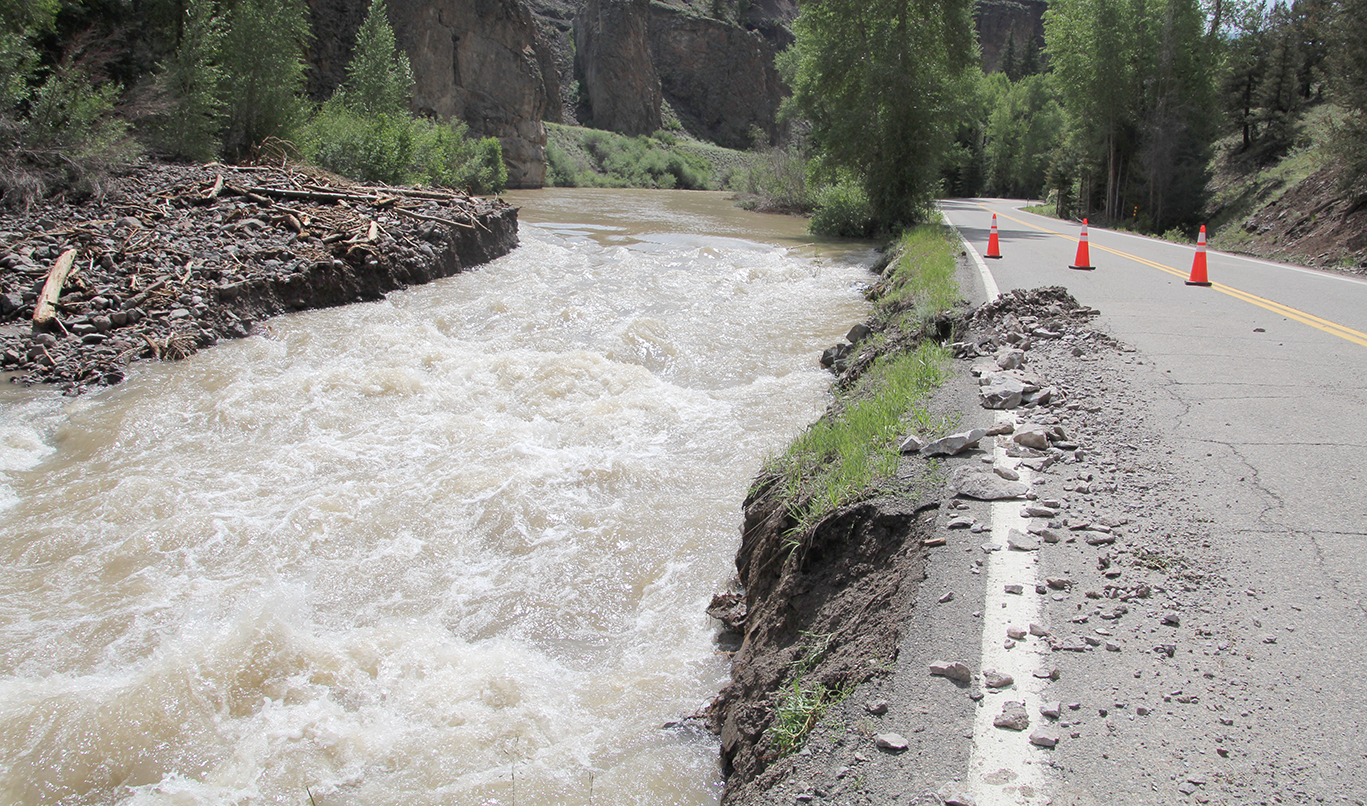 Near simultaneous late Thursday afternoon, a microburst of heavy rain occurred at Burrows Park on the upper Lake Fork, stranding the occupants of OHVs, jeeps, and pickups at the Grizzly Gulch Trailhead and various locations along the Shelf Road leading down into Sherman.

Emergency rescues and around-the-clock work reopening the Shelf Road by Hinsdale Road & Bridge personnel starting Thursday evening, July 22, was followed by an unprecedented second microburst of rain on Friday evening, July 23, which inundated a three-and-a-half-mile section of State Highway 149 north of Lake City resulting in a second wave of motorists who were stranded and the first-in-memory nightime closure of the highway.

After the highway’s emergency closure because of ongoing rain and a “compromised” section of Highway 149 near the Independence Gulch Trailhead caused by swift rising water eroding and undercutting a portion of the state highway, motorists spent the night in their vehicles along the highway north from Mile Post 89 (The Gate) and Mile Post 80 near High Bridge Ranch.

For motorists who were stranded in Lake City by the highway closure, a variety of emergency accommodations were sought, examples including beds which were set up in the Armory and annexes at both Community Presbyterian and First Baptist Churches. Other overnight accommodations were set up for a young Massachusetts family in Virden’s Mountaineer Movie Theater; an older couple found refuge at Ben Hake’s Back Country Base Camp, while Henry and Julie Rothschild in San Juan Hills Subdivision provided lodging to a stranded motorist, and Bill Goodwin and Ruth Ellsworth who were prevented from reaching their Blue Mesa Subdivision home.

Local vocalist Patrice Palmer had been in Gunnison late Friday night attending an energizing Gunnison Arts Council Locals Vocals event and spent the night in her pickup after reaching the roadblock.

In summing up her nocturnal adventure sleeping in her car overnight at Blue Mesa Reservoir, Lake City resident Faye Underwood aptly described the rain and mudflows as events of “Biblical proportions.”

For complete mudslide coverage, see July 30 issue of WORLD. Not a subscriber? Get subscription information here.

Photo of the Day